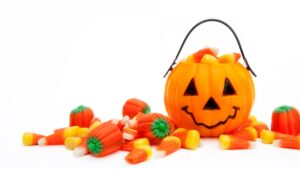 Halloween is every kid’s or kid at heart’s favorite time of year. Who doesn’t like decorating, candy, chocolate, and all things spooky? We all know that the Halloween tradition is. But we never really think about why we eat candy and chocolate on October 31st.

Celtics celebrated a tradition called Samhain, which is said to be the inspiration for Halloween. Samhain was the time to celebrate the last harvest for the year and the upcoming winter season. Celtics would also use the festival to honor their dead by leaving treats out on their doorsteps.

After the Catholics invaded Ireland in the 1st century, they changed many Pagan holidays to fit their religion. November 1st became the feasts of All Saints and All Souls. The day before, October 31st was called All Hallow’s  Eve.

The holiday changed, but other traditions stayed the same, like honoring the dead with food. But instead of candy, they left out soul cakes. Soul cakes are pastries baked with expensive ingredients. But instead of leaving them for ghosts, they gave them to beggars who came door-to-door praying for souls in trade for something to eat.

To avoid being bothered by evil spirits, they would wear costumes. This ritual was referred to as Souling. The tradition. of Souling didn’t make its way over to the United States, but in America, they used Halloween to celebrate the end-of-year harvest.

But instead of soul cakes and candies, they served homemade treats such as caramel apples and mixed nuts.

The idea of trick or treating didn’t start until the 1950s when neighborhoods began growing, and people needed something to get to know their neighbors and have fun. The idea of Souling was reinvented, and kids got to dress up and walk their streets and receive treats like nuts, coins, and homemade goods.

Candy companies needed an excuse to market their product in the fall.

So they started telling consumers that they needed to start handing out candy during Halloween. The companies created more miniature versions of their products, and adults were happy that they no longer had to bake treats.

Now, we cannot imagine a Halloween without mini versions of our favorite chocolate bars and other sweet treats.

At Lazar’s, we love Halloween and if you’re looking for some Halloween treats to celebrate the spooky season, we have a variety of treats for you. Visit our website for more information or give us a call at 1(516)829-5785.